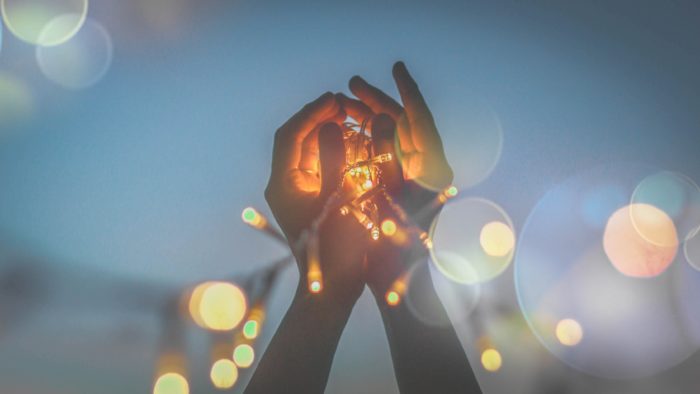 Every now and then we have to establish a new development environment on our machine. Installing lots of tools can get really cumbersome as we are obliged to remember what we need and in what order the installations should be run. In this post I will show you an example bash script that I use for installing a base set of tools. The script can be easily customized and you can fork it on GitHub and adjust to your needs. I strongly recommend using this in your company to make sure that every programmer will be able to install all tools required to work on a given project in a matter of minutes.

We will bundle installation of Angular, Docker, Guake, Node.js 12 (with npm) and OpenJDK 11 in a single bash script. As a result we will be able to set up everything with one simple command:

The script will also provide us with verification messages for all tools installed. In case of any failure the script will exit and the error message will be printed in the console.

The finished project is available in the GitHub repository – little-pinecone/ubuntu-web-dev-tools-installer.

I divided the script into separate files to ease the customization and to adhere to the Open/Closed Principle. The support directory contains variables and helpers. In the tools directory we have one installation and one verification script for every tool (e.g. angular.sh, angular_verify.sh). Testing the script is possible thanks to the custom Docker image enclosed.  The install.sh file holds the logic for the overall process and refers to the other files when needed. You can see the project tree on the image below: 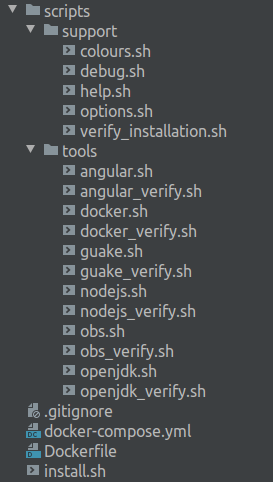 You will be prompted to accept the command:

The project contains Dockerfile and docker-compose.yml files to provide you with an Ubuntu18.04 instance where you can test the script. All *.sh files are already copied to the /home directory inside the container.

Start the container based on the provided image:

You can test the ./install.sh command without risking unwanted changes on your machine. Do not use sudo inside the container, run the script like in the example below:

If you’ve changed the image, or any script that you intend to test there, remember to remove the container and rebuild the image with the following commands:

Then you can create a new container and enter it:

You can fork the project and add your own installation and verification scripts — it is easy to keep a whole “library” of these scripts in your GitHub repository. Every time you call the $ sudo ./install.sh command you may pass any file that is suitable for you at the moment as a parameter.

How to divide one shell script into multiple files

We could keep all the code in a single *.sh file. However, I wanted to ease adding new scripts according to the future needs. Therefore, the main install.sh file uses the source command to execute scripts from separate files in the same shell:

From the source manual:

The scripts still share settings and variables, but it is easier to customize and maintain the code.

How to exit shell script if any command fails

When we are combining many commands to be automatically run one after another, we have to be able to terminate the script and debug in case any of them fails . In the install.sh file we put the following settings for the shell:

From the set command manual we know that the option -e terminates the execution in case of any error:

Then we include the debug.sh file containing the code responsible for tracking the last executed command and printing its exit code:

In order to see which command failed and what was the cause, we save information about the command that is currently being run as the last_command during the DEBUG SIGNAL_SPEC, and on EXIT signal we print that command and its exit code to the console. From the trap command manual:

E.g. if we run our script with the  following command:

and we got information about failure of a command executed from the openjdk.sh file, we know that all previous commands were run without errors and, after fixing the bug, we can resume the installation by typing:

When no errors occurred, we will see the last command printed with the 0 exit code; for my install.sh script the last line of the console output will be:

How to write a function

To make the code readable you can always extract some logic into a separate block of code. Remember to define the function before it is used, like in the example from the install.sh file:

How to pass options — adding help option to your script

To enable users to call your scripts with options, we need to read them in a while loop using getops, like in the example from the install.sh file:

getopts is used by shell scripts to parse positional parameters. In my case, the thv string contains the characters that will be recognized as valid and put one after another in subsequent iterations into the option variable.

Calling the command with the -h option will result in executing commands enclosed in the help.sh file (printing the manual) and exiting with code 0:

How to pass parameters

Bash keeps the position of the latest argument in the OPTIND variable.

From the bash documentation:

Each time it is invoked, getopts places the next option in the shell variable name, initializing name if it does not exist, and the index of the next argument to be processed into the variable OPTIND. OPTIND is initialized to 1 each time the shell or a shell script is invoked.

After we had traversed through the available options (thv) we want to set position to the beginning of the rest of the arguments passed to the command (file names). We have to do it manually as stated in the docs:

The shell does not reset OPTIND automatically; it must be manually reset between multiple calls to getopts within the same shell invocation if a new set of parameters is to be used.

We are going to apply the shift [n] command that shifts the positional parameters to the left by n. We want to start reading parameters from the position next to the one that was reached by the while loop — the first file name passed to the script. To remove all the options that have been already parsed by getopts we use the following line:

Just for illustration, calling the $ ./install.sh -v openjdk command without shifting this position would result in something like this:

The -v option was read again, the second time as a parameter for a file containing a verification script.

I use the array with file names in several places, therefore I assigned it to a custom variable, and then printed them for the confirmation message:

As you can see, the script will run a test docker container automatically if the -t option was passed when calling the command. In other case, we can ask a user directly for their confirmation before running any testing command.

How to read files in a loop

In the install.sh script we have the following function sourcing the files that we are required to have in the /scripts/tools directory:

Furthermore, we assigned parameters left after reading options to the tools variable:

Finally, we can easily call the function in a for loop that iterates over the elements in the tools variable:

How to check whether a file exists

Use the -e expression to determine whether the file exists:

How to check whether a string is empty

Use the -z expression to verify whether a string is empty, like in the example below:

According to the code above, a user can confirm the default decision “y” simply by pressing Enter. The confirmation variable will be null in that case, which results in proceeding with installation process.

How to colour the script’s output

I use the tput command with the setaf option to determine colours of the messages you can see in the console. In the support/colours.sh file you will find all variables I use to set or reset output colours:

To print a blue message, I start it with the $info variable. At the end of the message i put the $reset_colour variable to leave the rest of the output in the default colour:

You can change the colours as you wish, however I recommend to name variables according to their meaning and not necessarily the specific colour they are holding at the moment. After all, if you decide to print the debug messages in gray, you won’t have to fix every single occurrence of that variable in the code.

Photo by  Anggoro Sakti on StockSnap