In case of complex projects it is often expected to provide different layouts adapted to the needs of users – the logged-in user requires different UI elements than the guest. We have to customise the appearance of applications time and again taking into account many various aspects. Angular allows you to organise the presentation layer to easily handle multiple layouts.

Our application will provide two separate layouts – one served on a landing page view, the other used on a dashboard view. In this post we will display the default contents, just to present how to serve different components in isolated layouts.

To see the version with a horizontal navigation and a footer for the landing page and a vertical navigation for a dashboard, check out the Enhance the presentation layer of your multi-layout Angular app post, where all views are complemented with the appropriate html code and Bootstrap classes. The finished project is available in the following GitHub repository: little-pinecone/angular-multi-layout-scaffolding.

The layout folder will contain all components used to assemble the guest and authorised layouts and a component that is shared by both of them – PageContent. The actual content of two views – the landing page and the dashboard – is going to be stored in the pages folder. We are also going to create a routing module, so the layout served depends on the url.

You won’t find any authorisation logic in this example. 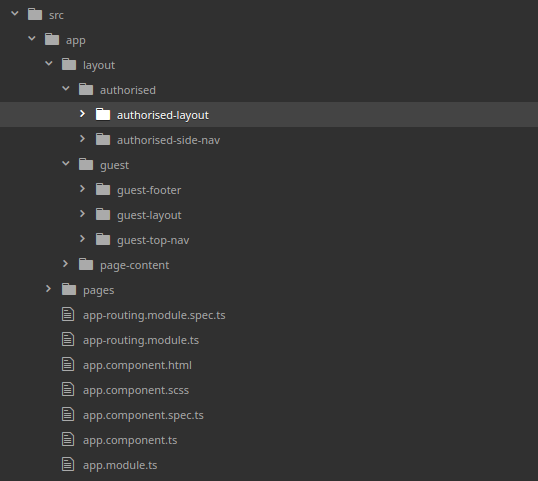 Angular CLI will create all parent folders for generated components – just remember to give the full path for a component.

To avoid code repetition and facilitate handling pages, we will create a component accessible for both layouts – the PageContent component:

Replace the default content of the page-content.component.html with the following code:

Create the component for the top navigation:

Create the component for the footer:

Bind the navigation, page content and footer within the guest layout:

Replace the content of the guest-layout.component.html with the following code:

Generate the component for our landing page:

Add routing to a page with the guest layout

The following steps are well covered in the official Angular tutorial.

Let’s create a routing module in the main directory of the project:

Angular CLI will create required files in the app/ folder and register the new module in the imports array of the AppModule.

We will need two separate sections for routes, but for now we can handle only the guest layout. Import GuestLayoutComponent and LandingPageComponent and add the following route to the routes array:

Do not display the default Angular page

We want to change the content displayed on http://localhost:4200/ – from the default Angular page to our landing page. Replace the content of app.component.html with the following code:

Check out the landing page of your app on http://localhost:4200/:

Make sure that the CLI is tracking changes, refresh the browser window with Ctrl+F5 or restart the Angular server if you can’t see the effect.

If you run the following command:

you will see that the default test set from app.component.spec.ts fails. Let’s investigate the errors:

AppComponent, GuestLayoutComponent and PageContentComponent don’t have any logic or html elements to test – we only need to verify whether they were created. You can read more about testing components in the official guide.

If the errors remain, try terminating the testing process and run the $ ng test command again.

Manage the layout for an authorised user

Create the component for the side navigation:

Bind the navigation and page content within the layout for and authorised user:

Replace the content of the authorised-layout.component.html with the following code:

Generate a component for the dashboard page:

Add routing to the dashboard page

Check out the authorised layout on http://localhost:4200/dashboard:

If you run the following command:

you will see that the tests from authorised-layout.component.spec.ts fail. Again, we encounter the error caused by the nested components:

If the errors remain, try terminating the process and run the $ ng test command again.

Add html content and styles to the landing page, dashboard and both layouts components. Check out the Enhance the presentation layer of your multi-layout Angular app post or visit the project repository to see how to style the pages:

Photo by Toa Heftiba on StockSnap

4 thoughts on “Apply multi-layout to an Angular app”